The 65 Project launched Monday, a Democratic-linked dark money group that seeks to “shame” and hold accountable more than 100 attorneys who tried to overthrow the 2020 election, adding to an ongoing slew of consequences that post-election lawyers have faced for their efforts. A group of anti-Trump lawyers, calling themselves the “65 Project,” has banded together to try to discipline, shame and otherwise destroy the careers of 111 lawyers who filed 65 briefs — hence the name — seeking to overturn the 2020 election.

As a believer in the accuracy of the 2020 election, and as a Democratic supporter of Joe Biden, I thoroughly disapproved, as a matter of policy, of most of these efforts to overturn the election. But I disapprove even more thoroughly of efforts to attack the lawyers who filed these briefs.

Here is the complaint from the 65 Project against Trump.

Reported by Brietbart, Alan Dershowitz writes, The project is headed by zealous hard-left Democrats, though it includes several moderate Republicans and some well-intentioned lawyers. But their goals, as described by their supporters, are indecent to the core.

As one put it: “This is mostly important for the deterrent effect it can bring so you can kill the pool of legal talent going forward.” One of its leaders also said that its purpose was to “shame them and make them toxic in their communities and in their firms.” He acknowledged that “the little fish are probably more vulnerable to what we are doing … threatening their livelihood … [and] their reputations in their communities.”

This is not the first time that groups of lawyers have tried to destroy the careers of other lawyers who have filed lawsuits with which they disagree.

During the 1950s McCarthy Era, several legal groups sought to destroy the reputations and careers of lawyers who defended the rights of accused Communists. During the civil rights movement of the 1960s, several southern legal groups tried to do the same thing to lawyers who were trying to dismantle segregation.

But this is the first time in my memory that centrists, liberals and leftists have organized to attack lawyers for filing legal briefs of which they disapprove.

McCarthyism of the left has become a serious problem throughout America. People are being fired, cancelled and shamed for expressing views that are not politically correct to progressives, wokes, and radicals. The formation of the 65 Project is among the most dangerous manifestations of this new form of left-wing McCarthyism.

I am not among the group of lawyers who are being targeted, but I hereby offer my help to those lawyers who are, despite my strong disagreement with the substance of their lawsuits. To paraphrase a statement attributed to Voltaire: I fundamentally disagree with legal efforts to overturn the 2020 election, but I will defend the rights of lawyers who did so against McCarthyite attacks.

The implications of this new McCarthyism are frightening. It was only 22 years ago when lawyers like me sought to block the election of President George W. Bush, believing as we did that Al Gore actually received more votes than Bush in Florida and was the rightful winner. We lost in court. But back then no one suggested going after the hundreds of lawyers who tried to prevent Bush’s certification. A dangerous weapon, like the 65 Project, unleashed by Democrats will surely be used by Republicans at some future time.

There are remedies in place for lawyers who file briefs that are frivolous as a matter of law. The courts are equipped to deal with such lawyers and do not need the help of this highly toxic project, whose goal is to deter lawyers from using the courts to undo elections.

As a nation committed to the rule of law, we should be encouraging legal remedies in court, rather than violent responses on the streets. Some lawyers will inevitably go too far, as many have done in other contexts. But to establish a special project designed to intimidate lawyers from engaging in such election challenges is contemptible.

Axios also reported on the issue with The 65 Project and Organizations like Media Matters, who is currently advising the 65 Project and is also being sued along with Dominion Voting in the state of Ohio for defamation case against the Ohio Secretary of State candidate Tore Maras.

A dark money group with ties to Democratic Party heavyweights will spend millions this year to expose and try to disbar more than 100 lawyers who worked on Donald Trump’s post-election lawsuits, people involved with the effort tell Axios.

Why it matters: The 65 Project plans to begin filing complaints this week and will air ads in battleground states. It hopes to deter right-wing legal talent from signing on to any future GOP efforts to overturn elections — including the midterms or 2024.

Details: David Brock, who founded Media Matters for America and the super PAC American Bridge 21st Century and is a Hillary Clinton ally and prolific fundraiser for Democrats, is advising the group.

With groups like this going after lawyers licenses in effort to thwart the American people from using the proper means of the law to defend their rights, it has been a tough effort within the Peoples Courts for American’s to go Pro Se. Many Lawyers in each state have been backing down to take up these cases to defend the rights of the average citizen.

The people have taken to the pen and paper to be heard within their state by writing to their respective Attorney General and Secretary of State.

Here are the letters one can send to their AG and SOS within California. You can file a Consumer Protection Complaint as well as sending an email or physical letter to AG Bonta & SOS Weber.

March 17, 2022
‘I Did That!’ Biden Stickers Plastered on Gas Pumps Throughout Country 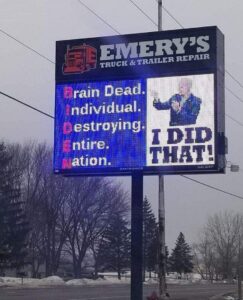 ‘I Did That!’ Biden Stickers Plastered on Gas Pumps Throughout Country