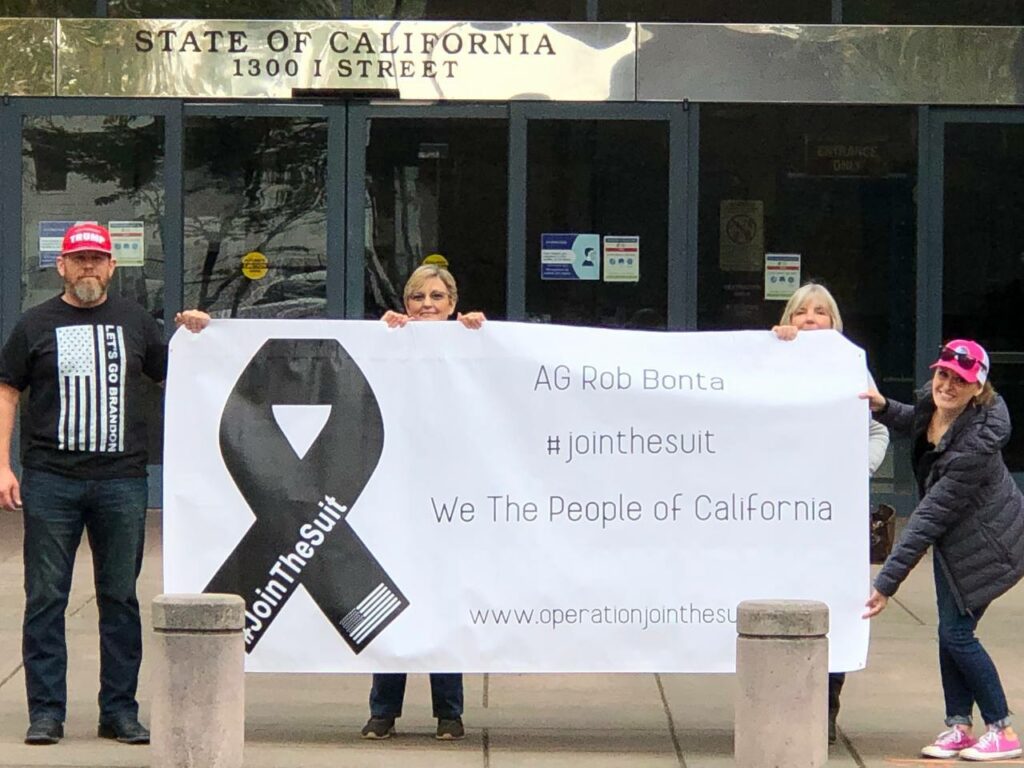 Over the past few months, the People of the State of California have communicated with your office on numerous occasions, whether through phone, fax, or e-mail, seeking your intercession for the grave injustices the People of California have suffered as a result of a federal government that has overreached well beyond the bounds of what could have been considered reasonable by our founding fathers and mothers. The constitutional atrocities inflicted upon the People through the actions and inactions of the Biden administration are especially egregious given the mounting evidence showing that the current presidential administration may not have been duly elected through a democratic process that accurately reflects the will of the People of the United States of America.

Today, you are once again presented with a choice – and a tremendous opportunity – to stand for the rights of your constituents, which are not only memorialized in the Constitution of the State of California and of the United States of America, but more importantly, are embodied in the natural rights enshrined in each individual who is, by virtue of being an American, his or her own sovereign.

On November 23, 2021, a lawsuit drafted by Kurt Olsen will be filed in the Supreme Court of the United States asking the Court to examine certain evidence purporting to establish the existence of substantial widespread fraud in the November 2020 presidential election. We demand that you honor your commitment to the People of California, who have entrusted you to uphold and protect their individual rights and liberties, by adding your name to the list of state attorneys general who are filing the lawsuit. Unlike the matter of Texas v. Pennsylvania, which last December was dismissed by the Supreme Court for lack of standing, this lawsuit will not focus on the election processes of individual States but will instead ask the Supreme Court to directly examine the mountains of evidence that have amassed over the past year since the Biden administration was installed. Given the quality of the evidence to be presented to the Court and the seriousness of allegations of election impropriety, it is a dereliction of your duty for you to ignore the lawsuit while other attorneys general fight on behalf of their respective constituents.

In support of our plea, we ask you to consider the immortal words of St. George Tucker, whose View of the Constitution of the United States is considered  the first  extended, systematic commentary on the United States Constitution after it was ratified and amended by the Bill of Rights. Having first been published in 1803, it was considered for many years to be an important handbook for judges, attorneys, law students, and statesmen. In that publication, Tucker, an attorney, judge, and law professor at the College of William & Mary, stressed that the Constitution draws its authority from the consent of the sovereign – the people of the several states.

Tucker explained, “The right of governing can, therefore, be acquired only by, consent, originally; and this consent must be that of at least a majority of the people.” Thus, “Legitimate government can therefore be derived only from the voluntary grant of the people, and exercised for their benefit.”

The evidence that will be presented in the impending lawsuit will establish whether the majority of the People have consented to the acquisition of the right of governing by the Biden administration. In the words of Tucker, when the federal government “exceed[s] the limits which the constitution prescribes to [its] powers, every such act is an act of usurpation in the government, and, as such, treason against the sovereignty of the people…” Accordingly, if the federal government is determined to have exceeded its constitutional authority by participating in the installation of a presidential administration that was not elected through the free will of the People, the federal government will have been found to have engaged in treason against the American people. We, the People of the great State of California, demand that you honor your oath by joining the forthcoming lawsuit and by protecting the natural rights of your constituents. Through working together to preserve the sovereignty of Americans and safeguarding the integrity of our elections, we can ensure the United States of America maintains its hard-earned and well-deserved reputation as a beacon of light that will remain shining even in the darkest of nights.

You can find the letters for the suit in each state here.